Loulan was discovered in 1980, but it was 3800 years ago that she died on the trade route known as the Silk Road.  The natural dryness and salty soil preserved her and over two hundred other mummies, individuals who had lived in several closely located settlements along the trade route. The mummy has been called the Loulan Beauty because of her amazingly preserved stately facial features that have remained quite beautiful even in death. 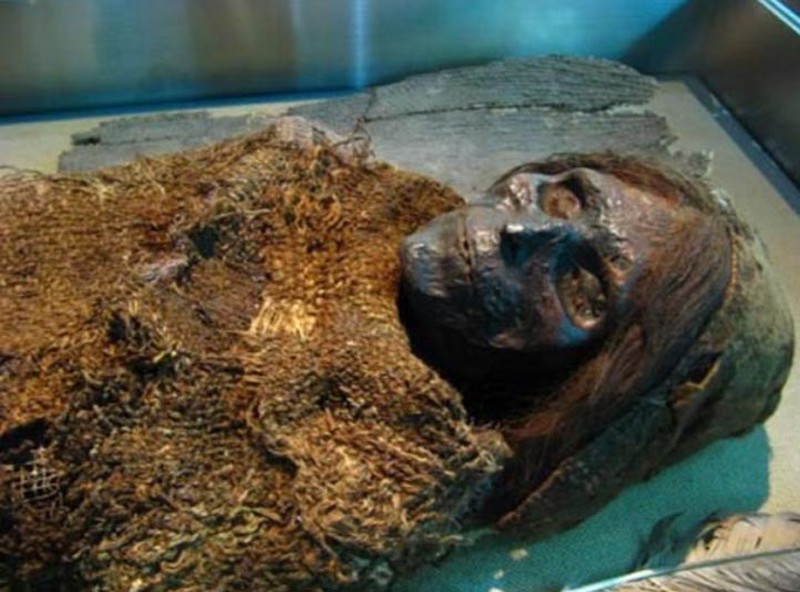 Unfortunately, the region where she and the others were found is politically unstable and the discovery of the mummies in the Tarim Basin in China was seen as a possible instigating factor for unrest. The Chinese government has been reluctant to allow full access to the mummies because of their racial identity. The Tarim mummies are Caucasian and this fact has given credence to the claims of the local peoples, the Uyghur, who look more European than Asian that they are the descendants of the original inhabitants of the area and not later arrivals, as Chinese history claims.

Victor Mair, a professor at the University of Pennsylvania, was instrumental in getting access to these mummies.  He and Paolo Francalacci, a geneticist, were finally able to obtain some genetic samples in 1993.  Their findings revealed that the mummies are indeed European but they probably migrated from the Siberian region and are unrelated to the Uyghur. The Chinese government did allow further testing in 2007 and 2009 and the finding supported the Siberian connection as well as suggesting the mixing of people from Mesopotamia, the Indus Valley, Europe and other unknown sources.  It is unfortunate that the Beauty and the others are at the centre of this controversy because it has distracted somewhat from the fact that there were Europeans in China at least a thousand years before conventional history has Caucasians in this area of the world.

Mainstream historians have always had this strange concept that early people were not world travellers when in fact most evidence points to just the opposite. We are led to believe that many cultures lived in isolation and that the world was not truly explored until the last five hundred years.

The Beauty of Loulan’s people are clearly of Caucasian descent and their grave goods suggest that they were probably merchants of textiles and perhaps leather goods. They were buried with many clothing items including one man who was buried with ten hats, all of different styles. The settlements along the Silk Road might very well have been meeting points where merchants from the west traded their goods for goods from the east. Having multicultural merchants would certainly have helped facilitate communication between the traders. Pliny the Elder described the traders from this area as tall with flaxen hair and blue eyes. He also described their language as ‘uncouth noise’.

Loulan herself lived to be about 40 to 45 and she probably died from lung disease caused by environmental pollution from open fires and the gritty sand in the air. She was buried in well-made woven clothing and some of the other mummies are actually wearing plaid patterned loomed cloth. Many of the mummies are tattooed, perhaps even most of them, but the descriptions of the individuals often do not mention the tattoos, or refer to them as an unimportant curiosity.  However, I believe the tattoos represent an artistic and cultural link with people all across Eurasia and even Western Europe. The tattoos appear to have been done in the manner of the Scythians, Thracians and the Pazyryk, where the design is achieved by the puncture technique not the sewing technique. The puncture method results in darker and larger fields of colour and is much more like modern tattooing.

One of the female mummies has crescent moons and ovals tattooed on her face.  The moon designs are suggestive of Goddess worship in many cultures and the presence of the tattoos on her face tells me, a tattoo artist, that whatever the designs meant they were very important to her since she chose to display them where she could not hide them; they also immediately identified her to others.  She also had heavy tattooing on her hands which may be symbolic or simply decorative as hand tattoos often are.  Interestingly, a male mummy from the area, known as the Chrechen Man has sun tattoos on his temples, the sun often represents the male God so it is possible that these two individuals functioned in some sort of religious or shamanistic role.

I believe a more detailed recording of the tattoos, their designs and the method by which they were done could reveal a great deal about the people, their beliefs and their connections both culturally and genetically with other groups all across Asia and Europe. Tattoos should not be ignored as if they are simply a decoration. A tattoo becomes the living flesh.  When an ancient person chose to be tattooed, they were choosing to be changed, transformed, and brought closer to their deities. A person, either modern or ancient, intends to carry their tattoo to the next world with them; in other words, it is a big decision not to be made lightly, and a commitment to quite a bit of pain. In ancient societies, the magic, prestige and power associated with a tattoo would have been an integral facet of the culture and an important aspect of their lives.

The Tarim mummies are ‘living ‘ proof that 4,000 years ago people travelled over vast distances, interacted, interbred and spread their cultural practices. The art of tattooing in both design and technique is one example of these connections and I believe there is much more to be learned if we just look closer.