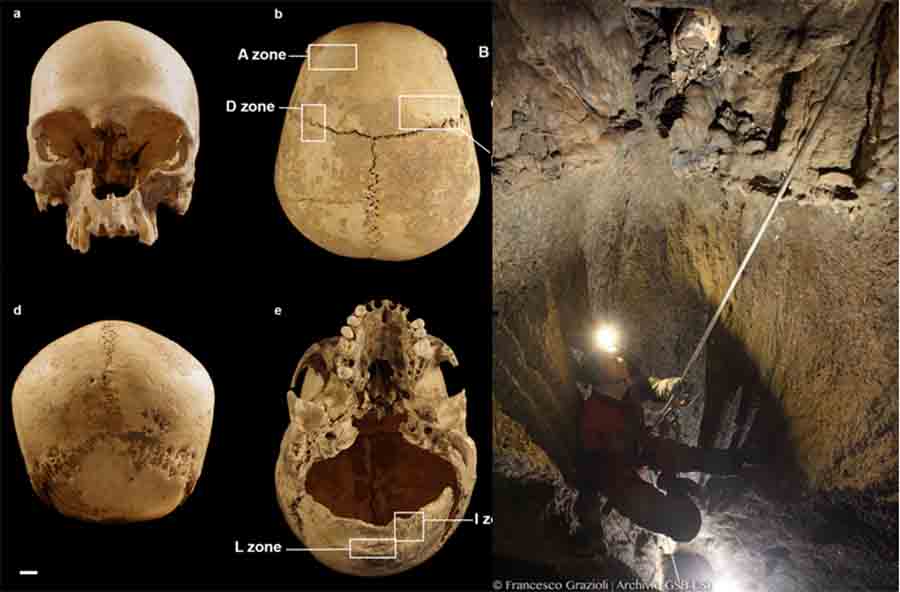 Archaeologists arrived at Marcel Loubans cave near  Bologna, Italy, in 2017 to embark on  a unique rescue mission . Their goal was to extract a solitary human skull that had somehow become marooned on a rocky ledge deep inside the  cave, at the top of a 40-foot (12 m) vertical shaft that could only be reached with specialized climbing equipment. Fortunately, the archaeologists were able to successfully retrieve the severed head, which consisted of a  cranium with no jawbone attached. It was found encrusted within multiple layers of sediment and covered with a thin layer of calcite cave rock, suggesting that water had been flowing over the top of it for centuries.

After retrieval, the cranium was shipped to the Laboratory of Physical Anthropology at the University of Bologna. Over the past three years a team of researchers from the Department of Biological, Geological, and Environmental Sciences at the University of Bologna have been playing the role of historical detectives, applying the very latest in advanced exploratory technology to unlock the secrets of the detached skull, and reveal more about the life and experiences of its former owner. In a study just published online in the open access, peer reviewed journal  PLOS ONE , the scientists have revealed their full findings to the public for the first time—and they have quite the tale to tell. 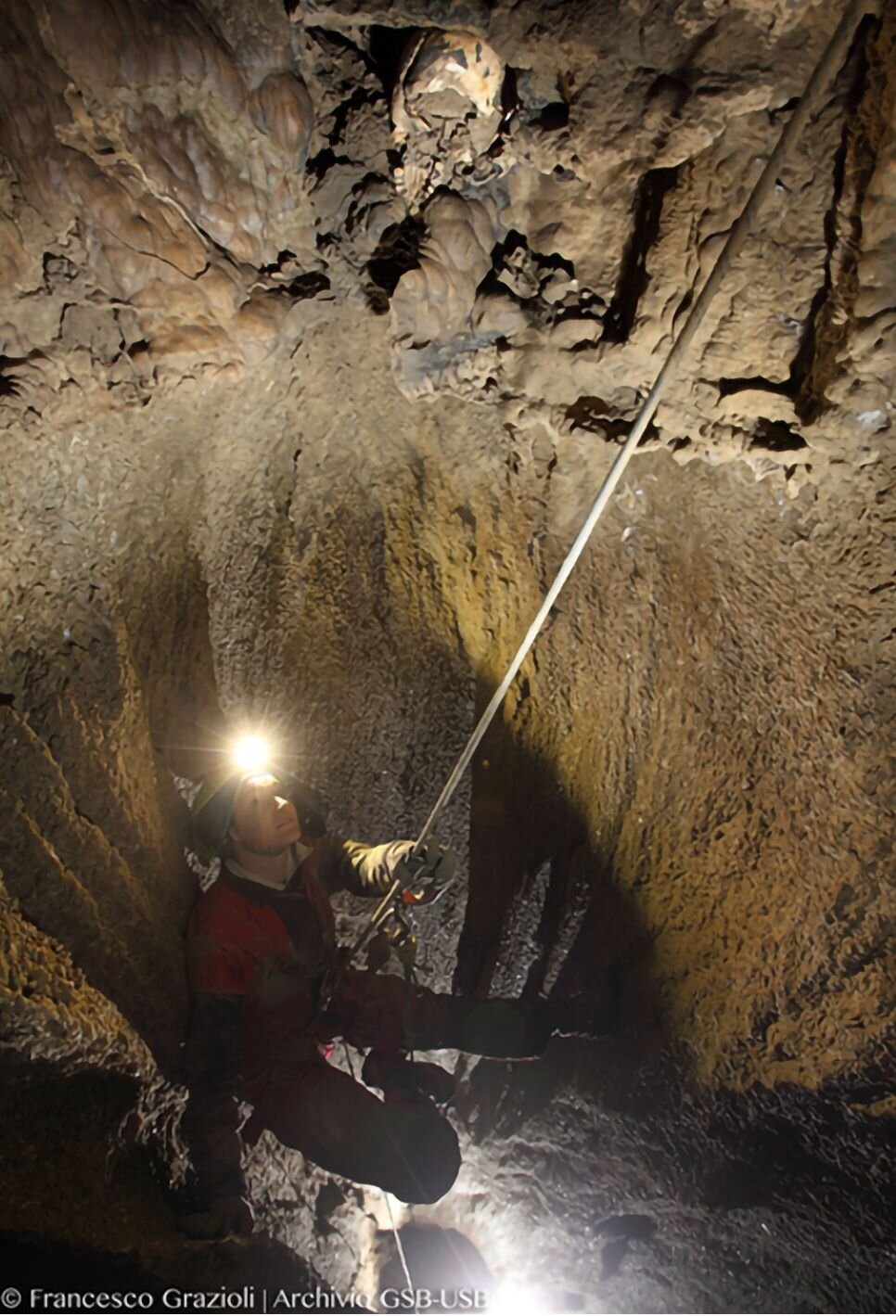 Through radiocarbon dating, the researchers were able to establish that the person it belonged to died sometime between the 3630 and 3380 BC. This meant she lived during a period of the  Neolithic Age  known as the Eneolithic Age (or alternatively as the  Copper Age , in recognition of the metalworking practices most common to that time).

By performing a CT (computed tomography) scan, they were able to determine that the  skull had belonged to a young female, who was between the ages of 24 and 35 when she met with her demise. There was no way to tell exactly how her head had become disconnected from her body. But a set of lesions on the cranium revealed that the tissue on her face had been cut and scraped off sometime shortly after she had died.

These scrape marks, plus the separation of the head from the body, allowed the researchers to make a definitive conclusion about the cranium’s origin and the young woman’s fate. They knew that her head had been severed from her body, and the skin and underlying tissue removed from her face, in preparation for an elaborate  Neolithic era funeral ritual . Her head would have been buried separately from the rest of her skeletal remains, which also may have been split up and buried in multiple locations. 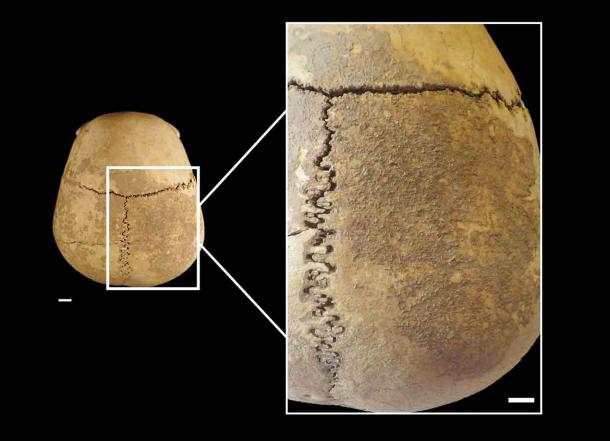 The scientists have done an in-depth analysis of the severed head discovered in a cave in Italy to understand more about its unique history. (Belcastro et al. - PLOS ONE /  CC-BY 4.0 )

Other Neolithic finds in the same region of Northern Italy had already provided evidence of this type of funeral practice. In Re Tiberio cave, in Italy’s Emilia-Romagna region, the arm and leg bones of 17 deceased Neolithic Age individuals were found neatly arranged, in a manner that suggested ritual significance. But their heads were nowhere in sight.

In other  caves in the region, Neolithic Age skulls with post-mortem cutting and scraping marks had been found, in contexts that indicated they had been prepared for interment. Combining geological knowledge with anthropological insight, the Italian scientists developed a plausible story to explain how the young woman’s skull had ended up in its final precarious resting place.

The shaft with the ledge where her skull had been resting had once been located near the entrance to a sinkhole, where water and mud had rushed in continuously until it had carved out a larger cave beneath the initial opening. If the woman’s head had been buried nearby, the regular runoff and flooding that created and gradually deepened the sinkhole could have washed the skull loose from its original resting place. From there, the skull would have ridden on a wave of flowing water and mud on down into the earth, where its descent was halted when it became lodged on a rocky ledge.

Based on a careful analysis of the sediment layers deposited on top of the cranium, and on the thickness of the calcite rock that covered the sediment, the scientists concluded that the skull must have plunged over the edge of the sinkhole approximately 1,370 years earlier. And there it had remained stuck in the accumulating muck for centuries, waiting to be discovered.

A Perilous Journey through the Neolithic Age

According to  Live Science , study of the severed head has revealed additional details about the life of its owner. The Marcel Loubens skull belonged to a young woman. Overall, it seems her health had not been good. The woman had miniscule holes on the top of her skull, which may have been a side effect of inflammation caused by chronic anemia.

She also had two thick, ivory spots on her skull, an effect consistent with the presence of benign tumors. In her mouth she had multiple cavities and poorly developed tooth enamel, indicating that she suffered from malnutrition during childhood and had continued to consume a less-than-optimal diet in adulthood.

An additional indentation was found on the skull, surrounded by parallel grooves that indicated possible  cranial surgery . She may have undergone an  ancient medical procedure  known as trepanation, which involves the intentional drilling or scraping of holes in the head to relieve pressure caused by head injuries or painful inflammation.

Somewhere between five and 10 percent of all Neolithic skulls recovered from across the world exhibit damage consistent with trepanation, which highlights just how common this practice was at that time. It is impossible to tell for sure how the woman died. But this  cave discovery  has uncovered a life was filled with peril—as was the journey of her disembodied skull after she had passed away.

by Piyasoma at 10:49 PM
Email ThisBlogThis!Share to TwitterShare to Facebook
Tags Ancient