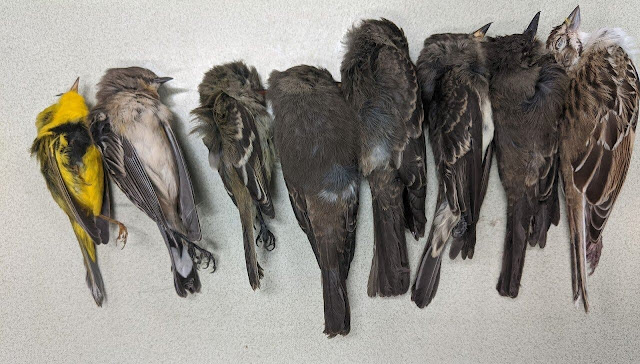 A recent video uploaded on Twitter shows dead bodies of birds around some flowers in New Mexico. This video captures a handful of the thousands of birds that are falling out of the sky as they migrate. Even biologists are scratching their heads.

I just recorded this up in Velarde, N.M. I've never seen anything like it. I'm told of other dead migratory birds found in Hernandez, Ojo Sarco and El Valle de Arroyo Seco. https://t.co/GpeFZbyuW7 pic.twitter.com/XXVM4AZrDu

Among these migratory birds are bluebirds, blackbirds, sparrows, and warblers.

In an interview with CNN, a New Mexico State University professor expressed how shocking it had been to see the dead birds. Martha Desmond from NMSU’s wildlife and conservation department also explained that the birds were lethargic and acting rather peculiar. She confirmed that this strange event is surely on a large scale. The current numbers suggest there could be millions of birds that are falling out of the sky.

Not just New Mexico, this phenomenon has been noticed in Arizona, Colorado, and Texas. Another intriguing question that has come up is why are the resident birds not affected? The birds are falling out of the sky in thousands, but it’s only the migratory birds that are passing the southwestern states.

WHY ARE BIRDS FALLING OUT OF THE SKY?

Desmond as well as some other scientists believe this mass-death could be related to the West Coast wildfires and climate change. In all probabilities, the fires forced the birds to start migrating before their migration season. They did not get to save enough energy to survive their long flights.

A biologist from NMSU, Allison Salas, tweeted how the birds are falling out of the sky everywhere. The dead birds seem mostly fine, “except that they are extremely emaciated. They have no fat reserves and barely any muscle mass, almost as if they have been flying until they just couldn’t fly anymore.”

#ClimateCrisis Alert!
HUNDREDS of dead birds have been reported throughout the state of New Mexico over the past two weeks or so. Please read this thread and retweet! (1/9) #TeamBird #avian #ecology #conservation #migration #extinction pic.twitter.com/8vyyVxjssK

Some scientists believe it was the smoke from the massive wildfires that choked the birds to death. The southwestern states were already suffering from a drought for some years now. This definitely has an impact on the diet and nutrition of these birds as well.

Since the birds are falling out of the sky at a rapid rate, the University of New Mexico has created an online project. They are encouraging locals to share their photos and observations of the birds. With this massive amount of data across a large area, scientists have a better chance of understanding the phenomenon better.

As is the case with most such abnormalities in nature in recent times, Desmond seems to be sure that it is climate change that has a huge role in this incident.

This article was originally published by shared Read the original article here.