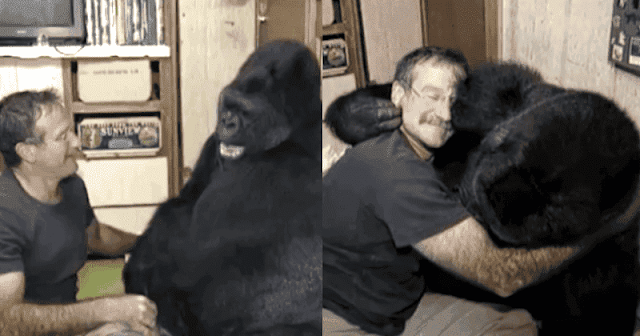 Robin Williams is a great actor whom we know and love. He has made us laugh numerous times. Well, it seems that he can make animals laugh too. Robin Williams made Koko the Gorilla laugh. Koko’s childhood companion, Michael, passed away over six months before meeting Robin, and since then, she hadn’t smiled.

None of us like to hear about any death. Some deaths affect the deepest parts of our soul, and we are unable to let it go. Even though we didn’t know him personally, Robin William’s death made each one sad. As an incredibly talented actor, he raised our spirits and made us happy with the antics in his movies. No one could resist his charm. Apart from being a great actor, he was an extraordinary human being and showed kindness towards animals.

Koko uses American Sign Language to express her emotions and shows how she feels. She was quite famous around people due to this fact. One of the few apes who could express feelings when she met Robin Williams back in 2001 hit it off instantly. At the time Koko met Robin, she was grieving as she had lost her childhood friend, Michael, the gorilla six months earlier.

Koko & All Ball, her Manx kitten my favorite celebrity from childhood

Koko felt free around Robin and didn’t hesitate to laugh. They had the most fantastic time together, tickling and hugging each other like they’ve known one another a lifetime. Koko comes into the room and takes a seat next to Robin, who was sitting on a chair waiting for her and takes his hand. Koko and Robin were observing each other and laughing for the longest time.

During the interview, Koko’s caregiver Francine Patterson said that “Notice that Robin made Koko smile — something she hadn’t done for over six months, ever since her childhood gorilla companion, Michael, passed away at the age of 27. Robin’s ability to ‘hang out’ with Koko, a gorilla, and in minutes become one of her closest friends, was extraordinary and unforgettable. But not only did Robin cheer up Koko, but the effect was also mutual, and Robin seemed transformed.”

Sending hugs for anytime who needs one today. pic.twitter.com/U3EIq8LsHY

As the two spent more and more time together, Koko felt comfortable around Robin, and even took his glasses and tried them on. During their time together, the gorilla searched his pockets as if Robin was a criminal, and also looked through his wallet at one point. The actor truly felt this heartwarming encounter and went on to say, “We shared something extraordinary – laughter. Koko understands spoken English and uses over 1,000 to share her feelings and thoughts about daily events, life, love, even death.”

Born in the San Francisco Zoo, this gentle giant had signed “cry” when she was told about Robin’s tragic death. Living most of her life in the Santa Cruz Mountains, Koko was taken care of by The Gorilla Foundation in Woodside, California. As she was raised by humans all her life, Koko understands 2,000 spoken English words. Her caretaker Petterson goes on to say that even though Koko is an ape, her intelligence level is the same as that of a three-year-old child.

This article was originally published by shared Read the original article here.