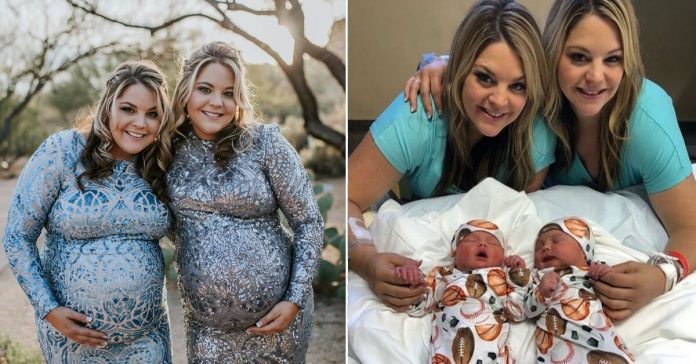 Jalynne Crawford couldn’t believe what she was reading! It was a text from her twin sister Janelle, saying that she was pregnant.

Moments later, Jalynne quickly called Janelle and revealed that she was pregnant, too.

What are the chances?

Both women couldn’t stop sobbing and laughing when they realized they were both pregnant at the same time.

The road to pregnancy hadn’t been easy for either of them. Janelle had dealt with an ectopic pregnancy and a history of polycystic ovarian syndrome while Jalynne had been through two miscarriages.

The sisters were also still recovering from the passing of Jennifer Pippin, their sister, the previous year.

The twins had always had a desire to be pregnant at the same time.

Their parents were thrilled too, but there was just one tiny issue.

Their parents had been with them individually when they gave birth, and they did not want this time to be an exception, especially since they were getting two grandkids!

But the sisters were separated by distance: Jalynne in Arizona and Janelle in California.

In order to make this work, Jalynne decided to talk to her doctor and ask if she and Janelle would be able to give birth on the same day at the same hospital.

Their due dates were a mere week apart, so the doctor said yes. The next step was the waiting game.

Then, six weeks prior to Janelle’s due date, she and her husband packed their bags and took their son with them to Arizona to be with Jalynne and their family.

The husbands of these phenomenal women were only too happy to go along with the plan.

Jason, Janelle’s husband, and Brandon Michael Crawford, a player with the San Francisco Giants and Jalynne’s husband, had met their wives back in college at UCLA.

They had all been athletes at the time, and both Jason and Brandon knew from the get-go that these sisters had a very special and strong bond.

Naturally, this plan wasn’t much of a surprise to them!

As the months went on, both women seemed to have almost identical pregnancies!

Each baby had the same length and were within ounces of weight of each other, and their positions in the women’s bodies were pretty much the same.

The doctors who examined both women were pretty surprised to see how identically the babies were growing.

On the agreed delivery date, both women successfully gave birth to beautiful children.

This happened on the 18th of June, and the whole family was present to meet their new family members.

Janelle, the oldest of the two sisters, gave birth first to son Jace Alan Leopoldo, and three hours later, Jalynne did the same with her son, Bryson Ryder Crawford.

Jalynne now feels that her family of four children is complete. Janelle, meanwhile, would like two more kids to match Jalynne’s.

Welcoming these wonderful babies into their lives was a fantastic event for these two women and their loving families after a difficult year, and we wish them the best of luck!