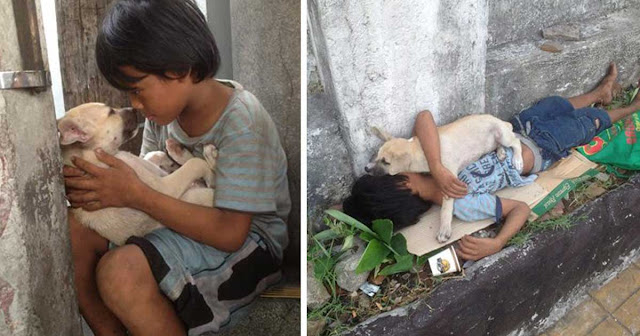 This little boy has a great friendship with his puppy, and the pictures of the two of them have touched the hearts of thousands.

Rommel Quemenales is 11 years old. He lives in Quezon City in the Philippines.

A dog is a man’s best friend, as the saying goes. And there is a lot of truth behind that statement.

Maria Kabs published the photos of Rommel on Facebook. She found him on the street with the little puppy, and was so moved she just had to take a picture of the two friends.

After she published the photos on Facebook, they received huge attention from around the world.

Rommel tells Maria that his parents separated when he was little. He has an older sister in another city that he goes to visit when he can afford to. He dreams of going back to school one day. He has only had the opportunity to attend second grade.

One month earlier, he found the puppy on the street. He adopted him and named him Badgi, so he would have a friend to hang out with. Now he teaches Badgi tricks and sleeps with him on the street ..

It hurts my heart to see Rommel. I wish he was able to go to school and live in a warm and safe home with his family and dog.

It’s incredible that the little boy has so much love and compassion even after everything he’s been through.

Badgi doesn’t care if his owner is rich or poor, he rests safely in Rommel’s arms and loves him with all his heart.


Share this article if you were also moved by Rommel’s story!